Azrael is a headless horseman (though his "horse" is actually a demonic motorcycle) that was cut from the game.

Azrael was supposed to appear in Ghost in The Military Machine, a mission also cut from the game. In the mission, Azrael was to be bound to a cannon on the base and - much like the Dragoon - would try and foil the player's efforts until released. 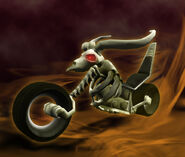